SPREAD SOME LOVE
SEIZE THE DAY
& CHANGE THE WORLD

“Exuberantly upbeat, Make it Happen! carries a strong positive message and is highly recommended for car trips or stay- at-home fun.”
- Midwest Book Review
“If the buoyant title track is any indication, Peasley’s latest album will be the dose of joy we all need in an otherwise uncertain, chilly winter.”
- Rockmommy
"A heartwarming and inspiring reminder that we can make the world better than ever. An amazing reassurance of hope in our topsy-turvy world. This is Stacey Peasley at her utmost finest, and I applaud her for putting the right kind of song at the right time. The anthem we really need, for many good reasons."
- Matt's Random Thoughts blog
"Peasley has bright, bouncy messages that uplift in an infectious way and spread good. Well done."
- Midwest Record 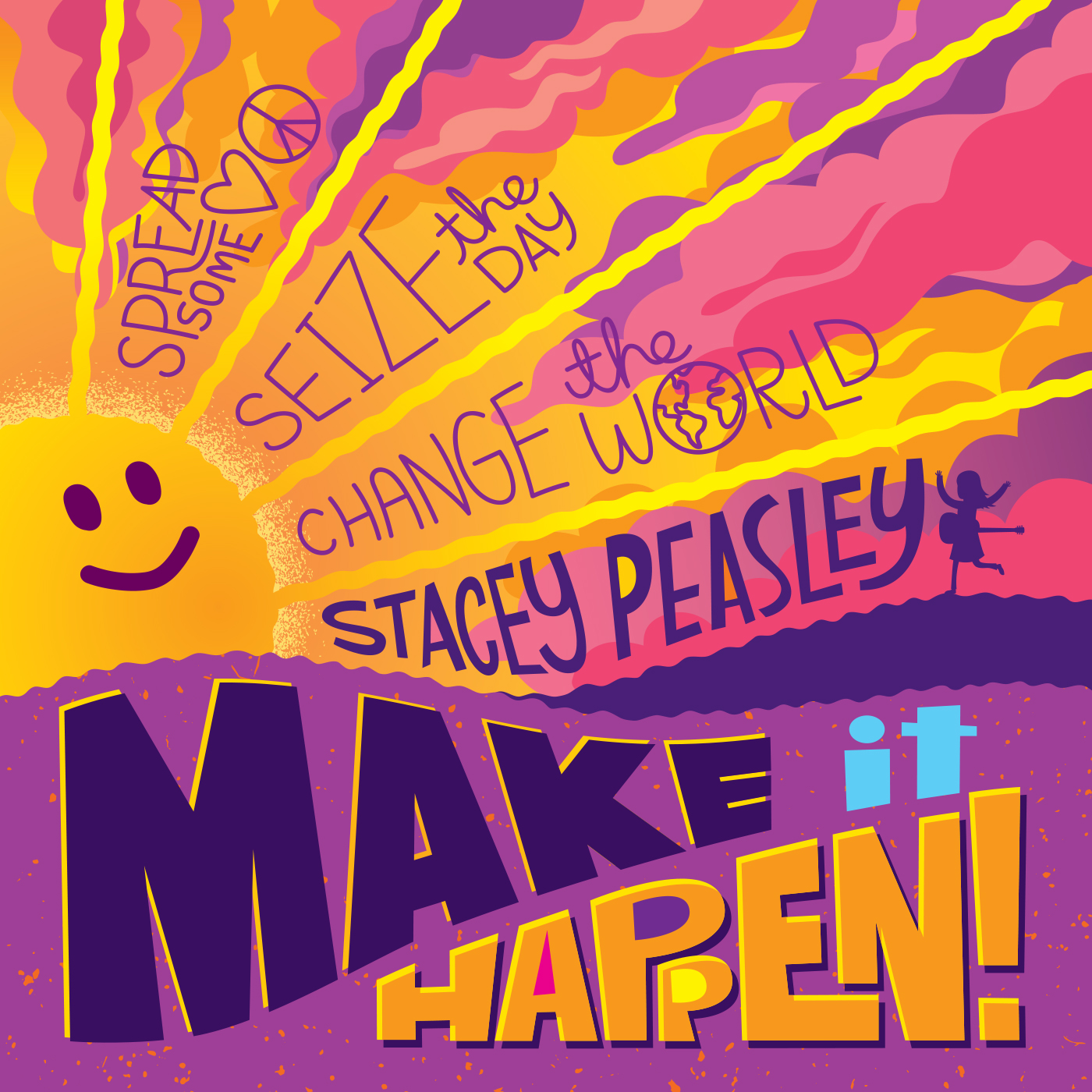 “Bright and jubilant, the chin-up-and-have-fun music is especially wonderful for helping little ones get over blues and doldrums.”
- Midwest Book Review
“Stacey’s music is joyful, playful and inventive.”
- School Library Journal
“Top notch production, arrangements and performances will make this a must.”
- NAPPA 2019 review of Stacey Peasley’s Under the Tree
BOSTON (December 14, 2020) – The Boston area’s beloved family musician Stacey Peasley celebrates a positive message of empowerment, courage, and strength in her fifth kids’ album, Make it Happen! Packed with lyrical wisdom born of Stacey’s life as a parent, teacher, and performer, Make it Happen! will be released on February 12, 2021.

Make it Happen! centers on creating relationships and experiences, both individual and community. Each of the album’s ten original songs imparts a story carefully crafted to resonate with children and families. The heart of Stacey’s charm is found in the ways these stories roll effortlessly out of her songs to connect with listeners in a meaningful way.

“I think I’m a good storyteller, and I write songs about unique experiences that aren’t often written about,” says Stacey Peasley. “I have been inspired by so many different things this past year. Looking at our social and political landscape and honing in on the experiences that kids have shared with me has really taken my writing to a new level. Credit is also due to my long-time producer Marty Beller. Throughout our ten-year collaboration, Marty has always applauded my work and pushed me to do better when he knew I could.”
READ MORE

Make it Happen! opens boldly with a title track whose lyrics and style are a perfect match for the song’s profoundly inspirational message. With this number, the album’s co-producer, Marty Beller, offers a tip of the hat to Michael Jackson’s “Man in the Mirror.” Happy Tears” is a “tale of two Staceys,” celebrating the mom right alongside the consummate professional onstage, singing her heart out for many years in the NYC-based ‘50s and ‘60s girl group tribute band, The Chiclettes. Stacey’s great vocals, backed by Vitalijus Lisovskis’s outstanding tenor sax, recreate the very best of a beloved era on this standout ballad. Other highlights include “What Girls Do,” inspired by Elizabeth Warren’s presidential campaign, when Senator Warren made pinky promises to young girls and told them, “I’m running for president, because that’s what girls do.” “At the Parade” is another lyrical snapshot, dated March 2020. In the silent spring of the quarantine, St. Patrick’s Day parades were cancelled, but from Stacey’s indomitable spirit emerged the idea that families could create their own parades at home. Reminiscent of ‘80s Cars and ‘90s Weezer songs, “At the Parade” conjures a scene led by the brilliant trumpet of Matthew Girard. Channeling Queen’s “We Will Rock You” was “just the ticket” that inspired Stacey Peasley to compose her first sports stadium anthem, “Play the Game.” Listeners will hear a distinctly ‘90s-style, No Doubt/Gwen Stefani influence in “Goodie Bag.” The only song on Make it Happen! that was recorded live, “Soapy Bubbles,” is an updated version of Stacey’s most popular song, which first appeared on her debut album, Together.

A 28-year professional music career was launched when 18-year-old Stacey Peasley became a member of the NYC-based girl group, The Chiclettes, Stacey will forever retain a deep love and appreciation for the innocent, catchy songs of the girl-group era. For the past decade, however, Stacey has dedicated her career to performing for what she calls the most precious and delightful of audiences, children and families.

In addition to her work with The Chiclettes, Stacey’s significant credits including singing backup for ‘60s idol Lou Christie at the Continental Airlines Arena in New Jersey, Foxwoods Resort Casino, Westbury Music Fair, Oakdale Theater, and Tropicana Hotel & Casino in Atlantic City. Stacey’s TV appearances include Rock, Rhythm & Doo Wop 52, which still airs on PBS!  While maintaining a busy performance schedule for grown-up audiences at night and on weekends, Stacey spent her daytime hours with children as a public school social studies and English teacher. She holds a B.A. in history and an M.A. in secondary education, with a concentration in social studies, from Adelphi University.

After the birth of her first child, Stacey began to write songs that captured the amazing things she observed as a new mom, little knowing she would soon develop a brand-new career that combined both of her passions – music and working with children. Fast forward a decade, and Stacey can reflect on her many accomplishments as an established family music artist, with credits that include writing and recording four critically acclaimed albums, Together (2011), Lucky Day (2014), RSVP (2016), and Under the Tree (2019), with awards from Creative Child Magazine, Parents’ Choice, and NAPPA.  Lucky Day was named one of the Top 20 albums of 2014 by KDXH Radio’s Musical-Merry-Go-Round. Stacey is also the recipient of a Nickelodeon Parents Connect Parents’ Pick Award for Best Party Entertainer, as well as two Community Kangaroo Joey Awards for her Boston-based music classes, Lucky Day Music.

Stacey Peasley counts it a true blessing to be able to spend her days writing songs, singing, dancing, and bringing music to the lives of children at schools, classes, and shows. She says, “I love observing children, hearing the things they tell me, and using that amazing input to create music. The resulting songs might be curriculum-based or just for fun, but they all promote movement and imagination, and they’re all inspired by real-life experiences.”

Make it Happen will be available at Apple Music/iTunes, Amazon Music, Bandcamp, and www.staceypeasley.com.

Do you want a free sketch for your homepage? Visit weblifydesign.com